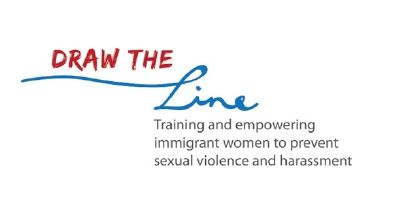 “Draw the Line” is a project funded by the European Commission.
In this project we want to signalize change, by empowering immigrant women who have made Europe their new home. This goal will be reached through information and training so that they can carry the same responsibility like every other European woman to save their honor and freedom. All women should be able to decide for themselves as to which CONDUCT, by WHOM, and WHEN is acceptable and which behavior is absolutely prohibited! This project is being implemented by partner organizations in six European countries. The aim of the project is to support immigrant women to overcome gender based prejudices. The project includes awareness raising, empowerment and training within various immigrant communities.
The project offers the opportunity to become stronger and to learn methods to prevent sexual violence and harassment. Supporting immigrant women to become their own advocates and further to train them to function as community leaders could prove to be the most sustainable method to address the needs of immigrant women living in a European context.

An EU-wide survey shows that 55 % of women across Europe have experienced sexual harassment. 32% of all victims said that the perpetrator was a boss, a colleague or a customer. 5% have suffered rape.
Violence against women:
• is gender based
• instigates physical, sexual and economical harm
• causes suffering.
Sexual harassment is expressed through unwelcome:
• staring or leering
• passing insinuating comments
• physical conduct of a sexual nature
• sexual advances or requests for sexual favours.
Sexual harassment can happen anywhere:
• in places of work and study
• on public transport systems
• in shops and markets
• engaging in sports
• while using main stream services
• over the telephone and internet
Sexual violence and harassment are topics that are omnipresent and primarily concern women belonging to all social, educational, cultural and religious groups.

If you are interessted to be peerleader, write us: aleksandram@feminoteka.pl